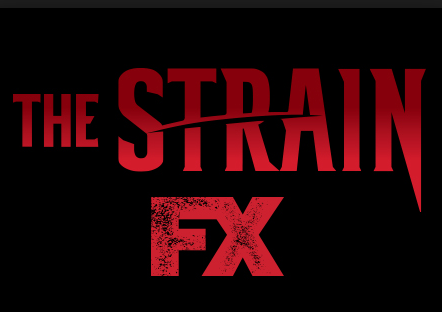 FX’s new drama THE STRAIN is looking to bring a darker vampire tale to your television screens. It wants viewers to curl up with a blanket and pillow and get ready to have the hairs on the back on their necks stand on end. THE STRAIN may initially start out like a routine virus outbreak tale, but right away people will start to figure out that this is no ordinary virus. People are not just dying, they are changing, and vampirism is not pretty. The transformations are brutal and ugly, and the vampires are meant to be the creatures of your worst nightmares. This is, after all, coming from one of modern film’s greatest monster-makers, Guillermo Del Toro.

At a special advance screening of the series at the Director’s Guild, the cast and producers provided some fun teasers about the show and what to expect from the various characters who get swept up in the first-wave of the viral attack.

Star Corey Stall noted that his character, Dr. Ephraim Goodweather, is forced to accept pretty quickly that everything he thought he knew is limited and that he will have to dig deeper into the human roots of animalism to determine what he is really up against. He also noted that Goodweather is the hero of the story, but he is not without his a few faults. Yet no matter how unprepared or flawed he is, Goodweather truly believes it is up to him to save the world and he will die trying, if necessary.

Then Natalie Brown portrays Kelly, the soon to be ex-wife, who starts off just wanting custody of her son. She is craving stability in her life and with the outbreak looming, she wants to get away from her ex-husband and his dangerous world. Yet there is a mystery about her too that will be revealed.

Ben Hyland, who plays Ephraim and Kelly’s son, was quick to reveal that even his character is not necessarily safe from the virus and that those vampires will be hovering in his world quite quickly. He also revealed that these vampires have long, ugly tongues that jab their victims in the neck. Ben also laughing admitted that this may be the kind of show to watch with the lights on.

Sean Astin’s character Jim Kent works with Goodweather at the CDC and Sean estimated that he has a 50/50 chance of surviving through the season. He is hopeful that he’ll make it through, but warns against getting too attached to any one character.

Jack Kesy portrays Gabriel Bolivar, who starts off as a pop icon/rock star that embraces the vampire infection right away. Though he did admit that there is a downside to being one of these types of vampires — it mean sacrificing a key part of his male anatomy.

Then Jonathan Hyde portrays Eldridge Palmer, the richest man on the planet who may or may not have gotten a bit more involved in the spread of the viral infection than anyone is yet aware. So if you are looking for a villain, you need to keep a close eye on Eldridge Palmer.

Robin Downes lends his voice for The Master, who is also portrayed physically by actor Robert Maillet. He candidly admitted that The Master just wants to take over the world. The virus is just the next step in human evolution.

Finally, executive producer Chuck Hogan revealed that there just may be a cure to the quick spreading virus, and if not a cure, perhaps a way of inoculating against the virus. But he advised that viewers pay close attention to the questions of: (1) who is behind it, and (2) why now?