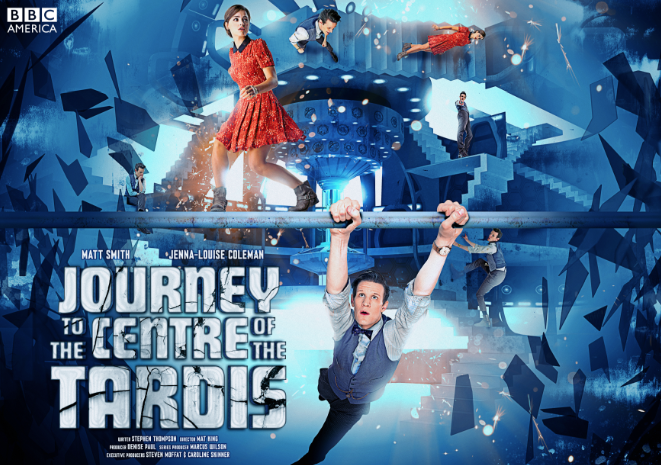 Four episodes into the travels with Clara Oswald (Jenna-Louise Coleman) and we have begun to notice a pattern with The Doctor (Matt Smith).  He is frantically driven to try to protect Clara and yet simultaneously unravel the mystery “The Impossible Girl.”   In the “Bells of Saint John,” The Doctor dashed to be at Clara’s side and then ferociously fought the Spoonheads to save her.  In “The Rings of Akhaten,” The Doctor was challenged to show Clara something amazing costing her something precious in return.  In “Cold War,” The Doctor negotiated with the deadly Skaldak to spare Clara and save Earth.  And in “Hide,” The Doctor once again tries to find a way to subtly solve the mystery of Clara Oswald with the help of a psychic.

As charming and fun as each of these adventures have been, it does not quite erase the constant worry from our minds that The Doctor may be slowly being driven insane because he cannot fathom the mystery of Clara – and that he could not save her twice before in “The Asylum of the Daleks” and “The Snowman.”  As much as it could not possibly have been the same girl, each time it was.  She called herself Clara Oswald or Clara Oswin (Oswald-for-the-win).  She used the exact same key phrase: “Run, you clever boy . . . and remember.”  And she was unmistakably Clara.  She was head-strong, independent, curious and not at all intimidated by The Doctor.  It was just enough of a coincidence for The Doctor to deem her “The Impossible Girl” and to begin searching for her throughout time and space to try to figure out how and why Clara kept popping up in his life, only to die a tragic death.

Being a Time Lord and knowing the rules of the time-space continuum, that there are fixed points and other times when time is flexible and may be rewritten, The Doctor is used to thinking outside-the-box and considering all the possibilities.  There literally has never been a mystery he could not solve.  But who is Clara Oswin and what does it mean that she keeps appearing in The Doctor’s life?  It is like stepping into a fun-house and seeing the walls of distorted mirrors, each showing a sliver of the true reality.  The Doctor is only seeing a piece of who Clara is and it is distorted each time, so he cannot see how her life fits all together.  And just like those who stand too long in the fun-house staring at all those warped mirrors, The Doctor will slowly start to lose his perception of reality simply because he is looking into a distorted reflection of what is really there.

This last episode “Hide” perhaps offered a clue.  The episode featured a time-traveler trapped in an alternate universe that was co-mingling with our universe.  She was just traveling at a different speed of time and in our universe; thus it looked like she was a ghost because she would appear only from time to time in the same fixed spot.  Perhaps this is exactly what is going on with Clara.  She too is a figure trapped in time, caught up in an infinite playing loop so that she literally pops up in different places at different times in The Doctor’s life.

We have seen before how those who travel throughout time are affected differently.  For some, their entire body chemistry could have been altered by their exposure to time-travel and the different variations of their molecular make-up from being disassembled and reassembled.  We know that Captain Jack Harkness (John Barrowman) became cursed to live nearly forever and that Donna Noble (Catherine Tate) nearly lost her mind trying to take on being psychically-linked to The Doctor.  Then what of Rose (Billie Piper) and Mickey (Noel Clarke) — they traveled to alternate universes and became a part of those worlds for a time.  As for Martha (Freema Ageyman), Amy (Karen Gillan) and Rory (Arthur Darvill), they too are not unaffected as their adventures changed them forever as well.  Could a normal life ever be as satisfying after having seen all the mysteries of the universe?  And then there’s River Song (Alex Kingston), conceived on the TARDIS, born of Amy and Rory, kidnapped by Madame Kovarian and then falling in love with The Doctor – her life was perhaps affected more than them all.

So why would Clara be immune?  We may not have yet seen the origin of her lifespan intersection with The Doctor, or perhaps we have and we have not yet figured out how it came to pass.

Regardless of where Clara came from or who she may be, what we do see is the effect she has on The Doctor.  To be confronted with the ultimate mystery and forced to watch her die over and over again, The Doctor’s mind and emotions are taxed to capacity.  He has run himself ragged watching Clara Oswald’s life at various points in time and trying to search for clues to the meaning of her.  Yet it is like watching a brilliant scientist beat his head against a wall.  Is it no wonder that The Doctor sought solace in the peace and tranquility of the monastery of Cumbria in 1207 to contemplate the mystery of Clara.  He knew he needed the down-time to recuperate.  But now that Clara is there and a daily part of his life, The Doctor is getting no rest, no peace and his mind seems to be in perpetual motion.  He literally cannot stop thinking about the meaning of her.  So if The Doctor seems a bit more frantic and anxious to please, it is perhaps he feels that the sands of time are working against him.  He knows that Clara will die again and likely soon.  It is a race against time and destiny.  As a Time Lord, The Doctor has circumvented time over and over again, but can he this time?

That franticness is taking its toll.  Are we watching The Doctor slowly lose his mind?  We only hope that he can solve the mystery of “The Impossible Girl” before it is too late – not only for Clara, but for The Doctor.  Imagine if some diabolical villain had found the perfect way to eliminate The Doctor by simply posing a mystery so unsolvable that it would drive The Doctor mad. Ingenious.  Now we just have to hope that the hands of fate are being pulled by destiny and not some evil puppeteer.

We too now will be beating our heads against the wall wondering if we’re watching The Doctor slowly go mad.  Pray it is not so!  In the meantime, be sure to tune in for the final four episodes of this season: “Journey to the Centre of the TARDIS” (April 27th), “The Crimson Horror” (May 4th), “Nightmare in Silver” (May 11th) and “The Name of the Doctor” (May 18th), Saturday nights at 8:00 p.m. on BBC America.