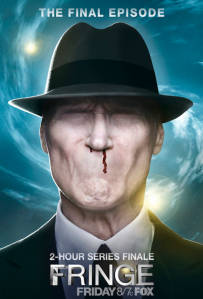 The time has come to say goodbye and FRINGE fans across the globe are preparing for a teary-eyed finale. It won’t matter if it is a happy ending or a sad ending for our heroes, it will be just hard to say farewell to characters that become like family. Will Friday nights ever be the same again without Walter, Peter, Olivia, Astrid and Broyles? Will it be enough to know that somewhere out there a “fringe” division exists and they are working diligently to save the universe or multiple universes from mad scientists, wormholes, dark matter, converging timelines and much, much more?

When it came time for the cast and producers of FRINGE to say goodbye to the fans at last summer’s San Diego Comic-Con, there was not a dry eye in the room. Even the normally impervious press were not untouched by the extreme emotion displayed that day.

So recently when the FRINGE Benefit event was held at the Paley Center in Beverly Hills, it was similarly emotional. Attending to say one final goodbye were executive producer J.H. (Joel) Wyman and star Lance Reddick. They even took a few minutes to share a few last minute memories and final words for the fans:

All along FRINGE has promised that it will deliver answers and which will not leave its fans hanging wondering what might have been; yet it is impossible to not suspect that, even after the end, whether we will wonder for years to come the final fates of our FRINGE heroes. Could they be living wondrous lives out there, somewhere? We certainly hope so. It is too painful to imagine that they would not be having more adventures – in our dreams at least.

The only thing for certain is that the 2-hour epic series finale of FRINGE, which airs Friday, January 18th at 8:00 p.m. on Fox, should not be missed. It is time to conquer the Observers and return the world to those who truly deserve it. It is one last fight for the future and we are certain that Walter, Olivia, Peter, Astrid and Broyles have one last trick up their sleeves – and with a twirl of one last red vine, Walter shall vanquish the Observes once and for all. That’s the FRINGE we know and love. So raise a glass and celebrate with them. The time has come to say goodbye. So long and farewell, long live FRINGE!