The new gritty Cinemax drama series BANSHEE invites viewers to get to know the sleepy community of Banshee, Pennsylvania, which is anything but what it seems. For a start, the new sheriff in town is not who anyone thinks he is. Lucas Hood (Antony Starr) is an ex-con, master thief who has come to town seeking $10 million in diamonds that he left with his ex-girlfriend who is hiding out in Banshee; and following Lucas’ breadcrumbs after his release from prison is the vicious crime boss Mr. Rabbit (Ben Cross) he stole the diamonds from 15 years before. Just how Lucas assumes the town sheriff’s identity is a clever twist of fate. It also gives him the perfect cover to come into town and shake things up a bit.

BANSHEE is right from the start a testosterone-laden drama filled with cars, guns, and rapid-fire violence. But at the center of it is newcomer Antony Starr, who portrays Lucas Hood. Lucas is a chiseled hero that will set hearts afire and rivets with one glance of his steely blue eyes. But for all his bad-boy ways and ease with taking out anyone in his way, Lucas just wants to win back the girl and take the money and run. Having served his time, Lucas feels he has earned a right to live in peace and happily ever after. Yet as he quickly realizes, things are not as idyllic and peaceful as they seem on the surface in Banshee and the town is in desperate need of a hero. Unable to turn his back on people who need someone to stand up for what is right, Lucas becomes the inadvertent savior they have all been silently praying for. Once upon a time Lucas may had been a thief and opportunist, but his time in prison taught him to appreciate the value of doing the right thing. So Lucas Hood pins on the sheriff badge and starts to clean up Banshee.

Aiding in Lucas’ quest to see that justice is served is his lone new friend in this crime-riddled town: an aging ex-prize fighter Sugar Bates (Frankie Faison). Owning the bar that is a central gathering spot for all the factions of Banshee, Sugar knows who is really in control of Bashee, a local racketeer Kai Proctor (Ulrich Thomsen) with roots in the nearby Amish community seeking to exploit and extract every last dollar from the hard-working citizens cowering in fear of his retribution. Also hovering on the sidelines is Lucas’ ex-girlfriend Carrie Hopewell (Ivana Milicevic), who is married with children and living in fear that her former life will come back to haunt her.

Then the true wildcard is Job (Hoon Lee), a computer hacker extraordinaire who specializes in forged documentation who reluctantly assists Lucas in covering his tracks and setting up his new identity. Job may look like an innocuous opportunist, but quickly proves to be as lethal as anyone of the seedy clientele that comes to him in their hour of desperation. Hoon Lee’s performance is a pure delight and is certain to break out as a fan favorite as he steals every scene he appears.

BANSHEE is a carefully balanced tripod of core characters between Lucas, Sugar and Job. Without one, the series would be topple, but with all three, it provides a layered story of conflicting interests and uneasy alliances, and yet establishes that these characters have faith that they have each other’s backs ’til the end. BANSHEE will seduce and entrance viewers as it peels back layer after layer of its percolating evil. Fortunately, Lucas Hood is exactly what the town needs to eradicate the criminal infestation. BANSHEE provides a mystery, a masterful con, a brutal dance for power, and a reluctant hero to cheer for. It offers unflinching violence sprinkled with frank sexual situations and yet still provides a compelling drama worth making an appointment to watch Friday nights.

So take the time to visit BANSHEE as it premieres on Friday, January 11th at 10:00 p.m. on Cinemax. You really want to meet Lucas Hood and spend time a few delightful hours in Banshee. 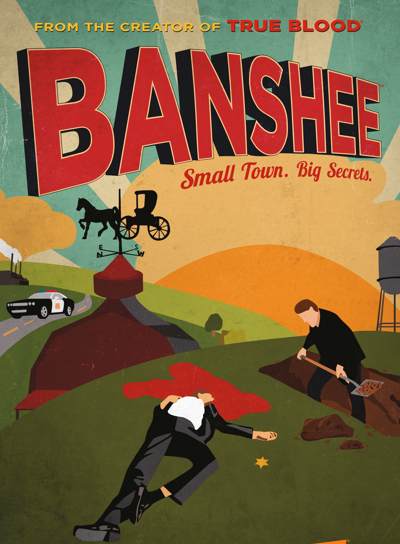