The Lifetime dramedy series DROP DEAD DIVA continues to pose the question of whether it is wise to tempt fate and destiny by trying to recapture pieces of a life that one has lived before. For Jane Bingham (Brooke Elliott), formerly Deb until she hit the “return” button at Heaven’s gate and found herself back on Earth — but in possession of another woman’s body — the desire to reclaim the life she lost has been overwhelming. Unable to bear the loneliness of her new life, Jane revealed her body-switch secret to her best friend, Stacy (April Bowlby), and is constantly fighting temptation to tell her former boyfriend Grayson (Jackson Hurst) the same thing. But at the end of the third season, it was not Jane’s indiscretion that may have finally revealed her secret, but Stacy’s.

When circumstances put Grayson and Stacy in close proximity, and Grayson still feeling the loss of Deb and sensing a kindredness in Stacy leaned in and kissed her, a surprised Stacy exclaimed that she was not Deb, but that Jane was. As if the look on Grayson’s face was not enough to make us wonder if he believed this surprising revelation, there was simultaneously the look of shock and horror on Jane’s face as she saw Grayson kiss Stacy. Not sticking around to hear or see how Stacy reacted, it was enough to send Jane fleeing off to Europe with her new beau, Judge Owen French (Lex Medlin).

So the 4th season opens with the core relationships in balance as Jane wants nothing to do with Stacy or Grayson and is trying to move on in her new life with Owen. Similarly, Jane’s guardian angel Fred (Ben Feldman) is attempting to do the exact same thing after having his heart trampled upon by Stacy last season as her career took off into the celebrity limelight that she has always craved.

Season 4 is pivotal season as both Jane and Fred must make choices that will have long-term ramifications. Will Jane finally confess her secret to Grayson? Will Grayson really believe that his long-lost love has been with him all this time — albeit in another woman’s body? Will Jane ever forgive Stacy for the betrayal of kissing Grayson, and can she ever trust Grayson again after watching him kiss her best friend? Will Fred find a way to forgive Stacy or does Heaven have another plan in store for the both of them? And just who is the new guy in town, Luke Daniels (Carter MacIntyre) that pops up every time Jane turns around?

While not as embroiled in the Jane-Stacy-Grayson-Fred drama, at the office, Jane’s boss Parker (Josh Stamberg) had also left abruptly in search of the son he never knew he had. So with Parker and Jane AWOL, that left Kim (Kate Levering) and Teri (Margaret Cho) holding everything together at the office. As the 4th season opens, the firm is barely holding itself together and it becomes imperative that Jane return and help out in Parker’s absence. The first challenge is finding a way to lure Jane back, then to figure out how to keep Grayson from verifying what Stacy said is true.

In true DROP DEAD DIVA fashion, it all plays out with aplomb and hilarious comedy. Juggling two lives and identities has become second nature for Jane and with a guardian angel hovering protectively nearby to assist, the fourth season reminds us why we fell in love with this charming show. As the old saying goes, “when life gives you lemons, make lemonade” and Jane has created a confection-sweet world around her that weathers even the most sour moments of life.

So you are invited to rediscover DROP DEAD DIVA and fall under its spell again when it returns for its 4th season on Sunday, June 3rd at 9:00 p.m. on Lifetime. 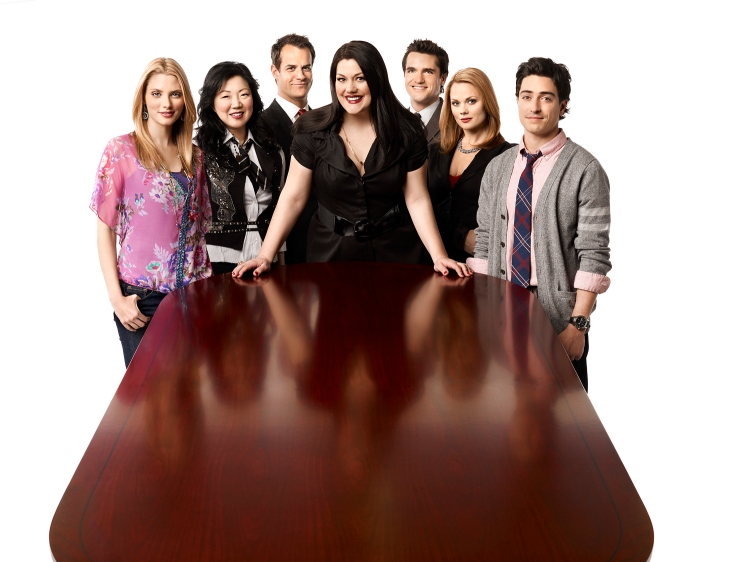