At the end of first season of FALLING SKIES, we all watched with simultaneous fear and fascination as Tom Mason walked boldly into the alien spacecraft seeking answers that only the extraterrestrials could provide in order to help his son, Ben. During a recent press conference call, star Noah Wyle talked about what lies ahead for his character, Tom Mason and the rigors of filming the second season of the series that has captivated fans across the globe.

How does the season 1 finale payoff in the 2nd season?
NOAH: Well, obviously getting off the friggin spaceship! It’s easy to ride that wave and then you suddenly go, “Oh my god. What did we just do? And how are we going to do it?” Aside from that I’d say we dominated a lot of storytelling last year to the harnesses and the kids and kids in peril. That was a storyline that I thought if we paid off pretty significantly and then we just wanted to move on into other aspects of the technology which I think we were able to do in in season 2.

Were you surprised how quickly Tom resurfaced and rejoined the 2nd Mass?
NOAH: I thought it was a pretty novel way of telling the story to have flashback sequences fill in the blanks of where’s he’s been and what’s been happening. It was a way of showing that the 2nd Mass, in his absence, has had a really tough road and they are not exactly sure what’s happened to him. So everybody meets or more like strangers than friends at the beginning.

How much flak did you get from fans after last season’s finale when Tom stepped into the alien spacecraft?
NOAH: I got a lot of phone calls about that. It was the number one feedback: what the hell were you doing getting on that spaceship? So we kind of wrote ourselves to do a little bit of corner trying to justify it and I think we did a really good job coming back season two, and explaining what happened to him and what happens to the group in his absence. It’s allowed us to really jump off from a novel place this year.

Did the second season feel different for you when you were doing it, or did it just feel more familiar?
NOAH: No, there were some significant differences. We moved the production from Toronto, Canada to Vancouver, so we had all new crew for the most part. We only had two or three people on staff that were there in season one. We also had almost a brand new writing staff and certainly a new show runner. So it wasn’t like we were building on internal momentum. We sort of had to start and get to know each other all over again, which gave it a different aura, just sort of ambiently. Then storytelling-wise, I thought we really stepped it up a notch — not having to dedicate so much of our screen time to exposition, establishing the world, establishing the characters. It allowed us a little bit more freedom to be creative in flushing out these character arcs and exploring the mythology of the aliens: why they’re here and who they are and how we’d radically misunderstood the situation in season one.

For your character Tom, are there going to be any major differences for this season?
NOAH: Well, the fact that he walked on the spaceship and what happens to him on that ship definitely conforms the character in a different way and he comes back slightly changed. Then it’s just sort of keeping with the trajectory that we laid out for the character’s arc or deconstructing the intellectual aspects of this character, and trying to show the emergence of a latent leader reluctantly, but an effective one over the course of this season.

With regards to Tom’s relationship with Anne, how that’s going to evolve this season?
NOAH: Last year we showed that there was a great chemistry between the two characters, but the practical demands of the day sort of kept them apart. That’s how we did a nice job sort of slowly building to that one moment of intimacy at the end when he entrusts his kids to her care and drives off on what could be a suicide mission. Then the clock gets reset a little bit as it’s been three months since we’ve seen him. She’s assumed he’s dead, and he’s assumed that she’s dead, and all the inherent complications about opening your heart up once it’s been destroyed. So it gives them a little bit of an obstacle to have to get passed. But ultimately they end up sort of together.

What would you say is the theme of the second season?
NOAH: There are a couple of significant themes that I have hooked into — that I felt had some personal resonance. I sort of would have identified with the themes of fatherhood, leadership and loss. I think Tom’s Achilles heel, in a lot of ways, is his children. That’s the one thing that he has to grapple with — this sort of dual feeling of wanting to keep his kids close and safe, and at the same time realizing that there’s a greater good to serve and that his kids are going to play a role in that regardless of whether he’s around or not. This sort of notion of reluctant leadership, of really not wanting to be the guy center stage with all the responsibility on his shoulders, but at the same time not wanting to shirk his duties or responsibilities in the face of great need. Then the notion of loss when everything that you sort of identify yourself as it gets taken away and you have to rebuild yourself in a different image. How do you go about doing that? Those were the three themes that I really kind of hooked into.

After three months away, does that lead to issues of distrust between Tom and his son Hal or do they instinctively know that nothing can ever come between them?
NOAH: Well, I think there’s an element of distrust certainly. Tom espouses it himself about himself. He doesn’t want to be a security risk or a liability in anyway. He can’t be positive that he was released [by the Overlords] without some ulterior motive in mind. So that allows us to start this season off with a little bit of tension in trying to figure out how to envelop Tom back into the fold and him trying establish a position of leadership again after having been gone for three months.

There seems to be a lot of distrust with Tom’s mysterious return, especially from Pope. Do you feel that your character distrusts himself more than the 2nd Mass might distrust him?
NOAH: I think they’re really happy to see him. I think his kids are happy to have him back. I think Captain Weaver is happy to have an ally again in a leadership position and that may be blinding them a little bit to the practical concerns of where is this guy has been and what have they done to him. Is he a homing pigeon leading the enemy right to them? It makes for some interesting storytelling in the first couple of episodes, and I think Tom’s a smart enough character to realize that that’s a possibility that he doesn’t really know himself — and until he can get his footing and establish himself back in the group and win their trust and vice versa, that he should be watched.

Are you still learning about the character and finding different ways to play him?
NOAH: Yes, I sort of feel like I am just getting started. With this guy, to a certain extent, over three or four years will be a slow deconstruction of his intellectual aspects, and he becoming a little bit harder. There is in a way a big of transference with the Weaver character, who starts off very militaristic, where Tom’s a bit more of a humanist; then gradually Weaver becomes a lot more vulnerable and a lot more human, and Tom gets a lot more practical and a lot harder-edged. We sort of continue in that vein hopefully arriving at some sort of synthesis between the two of them as the most effective way of leading this group, which isn’t not traditionally military-dogmatic style and not exactly touchy-feely human, but something in between.

What continues to be the most challenging aspect to you for the series for your character acting-wise?
NOAH: It’s kind of an aggregate thing. It’s a tough show to do. Most of it takes place at night, so you go to work around 12 p.m. in the afternoon and you work till 5 a.m. in the morning. And because we wanted this year to be less focused on any single location, the group had to be a lot more mobile. It made for some long, wet nights as were shooting in mostly practical locations and exteriors.

Is it a challenge for you trying to act or interact with Skitters or the other computer-generated elements in the show that aren’t there with you on the set?
NOAH: I hadn’t done a lot of that kind of work up until this show, but it’s sort of a muscle that the more you exercise, the better at it you get. And it’s kind of 50/50 between the screen and practical. We do a lot of work acting to tennis balls on the end of sticks. But then we also have a really talented puppeteer and a really great Skitter suit for the close up personal interactions with the aliens. I would say the most difficult part is when you’ve got four or five actors in the same frame all having to react to the same thing that’s not there. Trying to find a line of continuity and performance can be tricky.

The unwashed-look really brings an authenticity to the show in the morning. What is the process behind getting it to look like that and was that a decision of yours?
NOAH: I wouldn’t say that there were disagreements, but the costumers love putting people in different costumes, and I kept saying I am not changing my jacket until the group goes into a GAP and finds a new jacket. Like when it happens on screen, I will do it. And I felt this same way about shaving and everything else — that until there was a moment of respite with these characters would sort of rediscover their sense of vanity, there really wasn’t any point in grooming. And that look of being smutty, dirty, bloody and shaggy does lend itself to an air of authenticity.

Obviously you do a lot of fighting this season and last. Did you get a lot of like fighting and weapons training?
NOAH: I wouldn’t say a lot. When we showed up, I went into office building with a stunt man and hit a punching bag for about an hour. Then we went to the sound stage and ran around shooting blanks at the walls for another couple of hours and then we were let loose.

Was it difficult to film the scene that has been previewed where there are people working on your eye?
NOAH: Yes. It helped that I was being restrained by four actors. But I had great confidence with in Moon Bloodgood’s medical skills and she kept the forces away from my eyeball.

To see exactly what Tom Mason went through while on the alien ship and during his three months away, and the thorny issues of distrust that arise upon his return, be sure to tune in for the 2-hour second season premiere of FALLING SKIES on Sunday, June 17th at 9:00 p.m. on TNT. 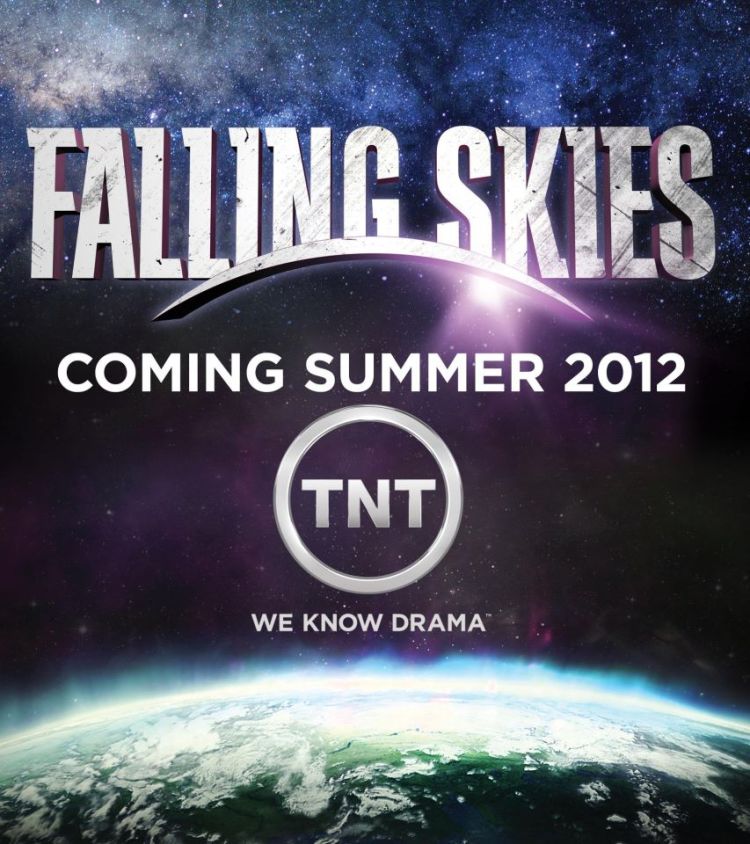 One thought on “FALLING SKIES: Noah Wyle Interview re Season 2 (2012)”